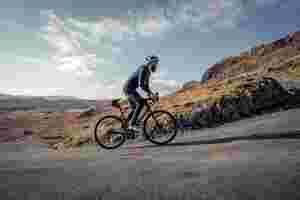 A short review on the new Lapierre Pulsium 3.0 Disc, by Kevin Merrey.

It’s been a long harsh winter. The UK has been battered by storms, floods, high winds and more recently widespread and heavy snow. A hard winter to keep up cycling, with many rides ending with numb toes and wet through kit. However, when I recently took Lapierre’s new Pulsium Disc 3.0 up to the Lake District on a ride and photoshoot we were blessed with perfect conditions. Not only perfect conditions for the photographer to get some stunning shots, but also just right for riding around some of the most incredible and iconic cycling roads in the UK.

The plan was to start at Lake Windermere in the mid afternoon and to ride 40kms up to Hardknott Pass for hopefully some sunset shots. I was with my good friend Gavin Kaps who I have been on many film and photography projects, including working with him in places like Peru and Laos to film ultra cycling races, and filming endurance athlete Sean Conway on his 6500km Europe cycle record. But this time Gav would be photographing me riding the brand new Lapierre Pulsium Disc 3.0 prior to it’s official release in March 2021. 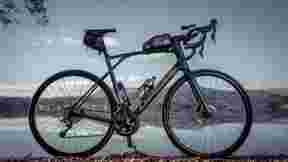 So, the ride started at Newby Bridge at the Southern end of Windermere, the biggest body of water in the Lake District at over 19km’s long laying in North/South position it's known as the gateway to the Lake District National Park. With the sun shining bright, and not a breath of wind I clipped into the Pulsium and set my sights for the top end of the Lake. I cruised comfortably along the shoreside road, which hugs the contours of the lake pretty much the whole way along. Peppered by boat houses and small jetties, and the odd restaurant and bar. Across the far side of the Lake, huge mountains and fells rise magnificently into the clear sky, and I could quite visibly see some of the steep terrain I was heading for. When we reached the top end of Windermere we took the opportunity to get the first set of images of the day, Gav snapping the Pulsium's sleek lines with the bike resting on a stone on the very edge of the mill pond still the lake.

Once back on the bike and peddling away, it was a short ride to get to the top of the lake before turning East to follow the winding and undulating back road that eventually picks up the course of the beautiful River Brathay. The Brathay is one of largest rivers in the Lake District flowing down from the high peaks and valleys to eventually feed into Lake Windermere. When cycling in the Lake District you soon realise that whatever road you take, the route is always pre-defined by the contours and geography of the surrounding landscape. One minute you are snaking alongside a river, the next heading up a winding pass or topping out across the saddle between two peaks. This particular part of my ride, still fairly low down, follows the river as it flows down between lush forests, pristine tarns and tiny villages. 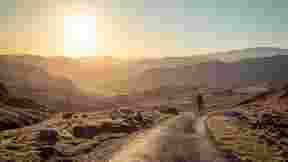 Eventually my route turns a sharp right and I peel off down into an area known as the Langdales.  Probably my favourite part of the Lake District for hiking and riding. A wide and flat floodplain valley, surrounded on either side by incredibly rugged mountains, a truly wondrous sight, especially when cruising along on a bike with plenty of time to drink in the views along the way. It’s nice and easy ride through this part of the lakes, but I know that not too far down the road things will get a lot harder as I head towards some of the steepest climbs in the UK. So, for now I make the most of being able to focus on the beauty of the landscape instead of my lungs and legs, which will be screaming at me for oxygen very soon!

I reach the bottom of the first climb after my gentle cycle through the Langdale Valley floor.  A series of hairpin bends rise abruptly ahead of me, signalling the start of the long and incredibly steep climb up the famous Wrynose Pass with its 25% gradients, and shortly after that, on to the even steeper Hardknott Pass, which is in fact the steepest road in the British Isles.  Things were about to get tough. The Pulsium performed well as I settled in for the long climb.  With enough flex in the frame to make things comfortable, but firm enough for me to be able to put the power down onto the tarmac and keep momentum as the road got increasingly steeper. Gav snapped away at various points as I tried to look cool and composed, but the truth be known my thighs were burning, and my breathing very laboured as my lungs desperately sucked in air to power my muscles. And my head was telling me to stop this nonsense at once, but whether it’s an ego thing or just something that’s worth achieving, I just kept pedalling. It is also that steep, if you do stop for whatever reason, it’s hard to clip back in again. 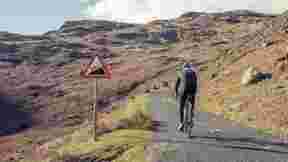 But it does top out, and when you reach a point where it flattens out for a few hundred meters before it drops down, the views are absolutely incredible. I pulled up alongside Gav, breathing heavily but feeling elated.  The sun was starting to get low in the sky by now, and everything was turning a deep golden colour.  It was here that we decided to make the most of the light and hang about taking the last of the photos. We spent an amazing hour capturing more images and soaking up the views, as I peddled up and down both sides of the top of pass.

Eventually the sun disappeared behind the distant mountains, casting the last of it’s golden rays across this truly epic landscape.  The temperature dropped to close to freezing, so it was finally time to call it quits on an incredible day of cycling and photography. We both climbed into the camper van with a hot cup of tea and sat looking back down the pass into the fast fading light and chatted about what an incredible day it had been, and how we had been blessed with one of the most stunning sun sets we had ever seen.  Not a bad day for a pedal. Not bad at all.