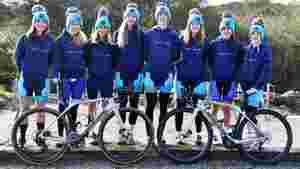 The Saint Piran Racing Team is arguably one of the most domestically recognised professional men’s cycling teams in the UK.

The Team - which includes riders who have competed at the Commonwealth Games - prides itself on a grassroots focus and supporting its local community in the South West of England. Through its development and Team expertise, Saint Piran identified gaps in women’s racing and cycling, so decided to do something about it.

The Saint Piran Women’s Racing Team was established in 2020 as part of the overall Saint Piran team. Whilst taking influence from the Men’s Team, the Women’s team have secured their own identity whilst sharing the same values and ethos of equal opportunity, while supporting and developing riders in a fun and proactive environment.

Saint Piran works with riders of all abilities and across various disciplines to develop the Team into well-rounded, competitive sports women. The Women’s Team initially began with a small group of riders within their own Development Team but has since grown to the team that it is today - competitively racing across a range of disciplines in the domestic calendar, with big plans to take on the international stage.

In line with recent events, such as the announcement of the Tour de France Femmes and Paris-Roubaix Femmes, there’s no denying that organisations are finally seeing the value of women’s cycling. With this in mind, the future of the Saint Piran’s Women’s Team is looking bright as they continue to build on the foundations, grow stronger as a team all with the prospects of expanding the opportunities for the team itself, and as individual riders.

Over the course of the next 12 months, Saint Piran Women’s Racing Team have plans to implement a separate Women’s Development Team, which will target women who are new to sport alongside riders wishing to gain more experience. Riders within this team will be assisted with online learning, training sessions, and support at races - emphasising personal and Team progression which ultimately guides riders into the First Team.

Saint Piran set out to provide the equivalent of the Men’s Team to riders within the Women’s First team, ranging from kit, bike provisions, support and all opportunities in training and racing. With the expansion of the European calendar in 2022, we are excited to see the Saint Piran Women take on the international stage, and can’t wait to support them through the next chapter.

Saint Piran identified the frequent low numbers of participation in women’s racing in the South West, so are implementing plans to bridge the gap. Alongside the addition of the Development Team, Saint Piran Women are running a race league across the South West region. This will encourage participation in a range of races and across all abilities of riders. The team is extremely excited at the prospect of this league, and can’t wait to see it develop and grow along with women’s racing - particularly in the South West of England.