In 1946, Gaston Lapierre started a small bicycle business in Dijon, France (Côte-d’Or - Burgundy), quickly finding success in an industry that was experiencing rapid growth in general.

The management was passed on to his son, Jacky Lapierre in 1960.

In 1972, a new factory was constructed in the industrial zone of Dijon to accommodate increased production numbers. In addition to the production plant, a new building was also dedicated to spare parts sales, complete with a new showroom for the bike collection.

The Lapierre brand thrives and becomes a reference among bike specialists. 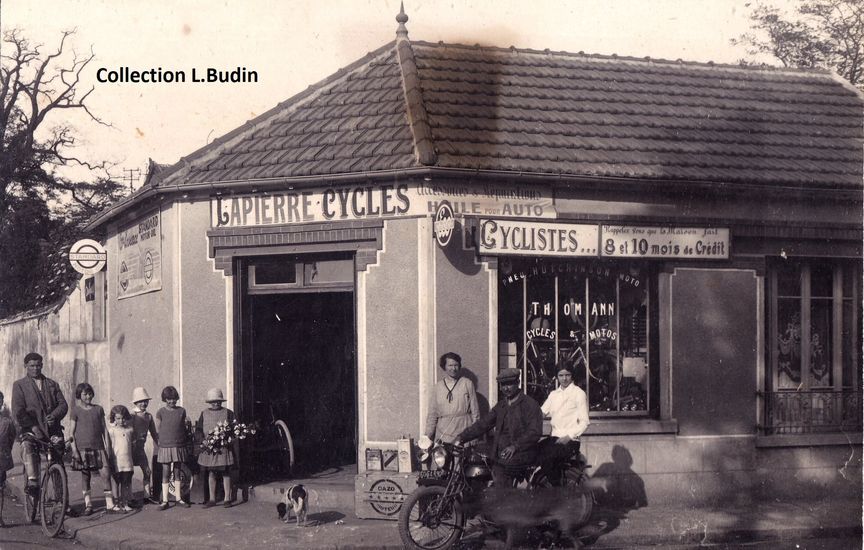 In the middle of the 80s, by being one of the few European companies to anticipate the MTB phenomenon, Lapierre quickly positioned itself as a leader of this market. Lapierre has since sponsored several competitive MTB teams who have won titles at all levels since the start of sponsoring activities in 1988.

In January 1993, Accell Group (Netherlands) announced its intentions to purchase 33% of Lapierre’s shares.

By 1996, the partnership proved to be successful, and in April 1996, the Lapierre family decided to sell the rest of their shares. At this time, Gilles Lapierre, son of Jacky, took control of the company as Managing Director. From this year on, the company would experience consistent and unprecedented growth. 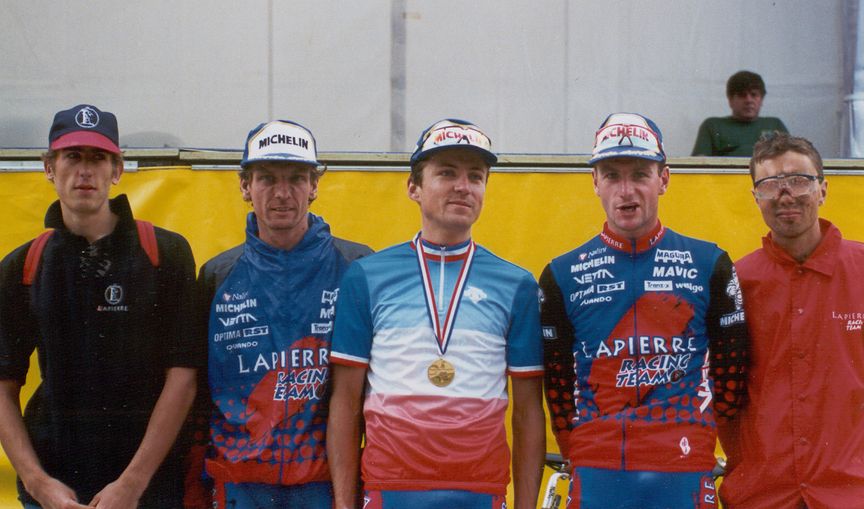 After solidifying Lapierre’s MTB image through competition and technology, Gilles Lapierre decided to try the same adventure with road bikes. This activity has always been an important aspect of the company culture, and a solid and ambitious marketing strategy was put in place in order for Lapierre to achieve the same status as in mountain biking.

2001, was a key year for Lapierre. After three years of research and development, Lapierre introduced an innovative full-suspension mountain bike, the X-Control, equipped with the patented FPS rear suspension system. Riders were now able to find an ideal combination of efficiency and comfort in one bike. The same year, Jérôme Chiotti went on to win the French MTB Championship on his X-Control, the first rider ever to win on a full-suspension bike.

The Highest Levels of Road and Mountain Bikes - 2002

The following year, in 2002, Lapierre took a huge stride in its road racing activities by signing with the professional team Française des Jeux. Lapierre could now be seen in Elite competitions, including the prestigious Tour de France. Results were seen very quickly, and Lapierre won the French national championship with FDJ rider Nicolas Vogondy and Bradley McGee became the individual pursuit world champion.

In 2018, the FDJ team has been renamed Team Groupama - FDJ after the formalization of the partnership with the Groupama company.

During the 2003 season, Lapierre decided to extend its field of activities. After signing a 3-year contract with 10X DH World Champion Nicolas Vouilloz, a collection of Freeride and DH bikes was created to complete the existing mountain bike range. 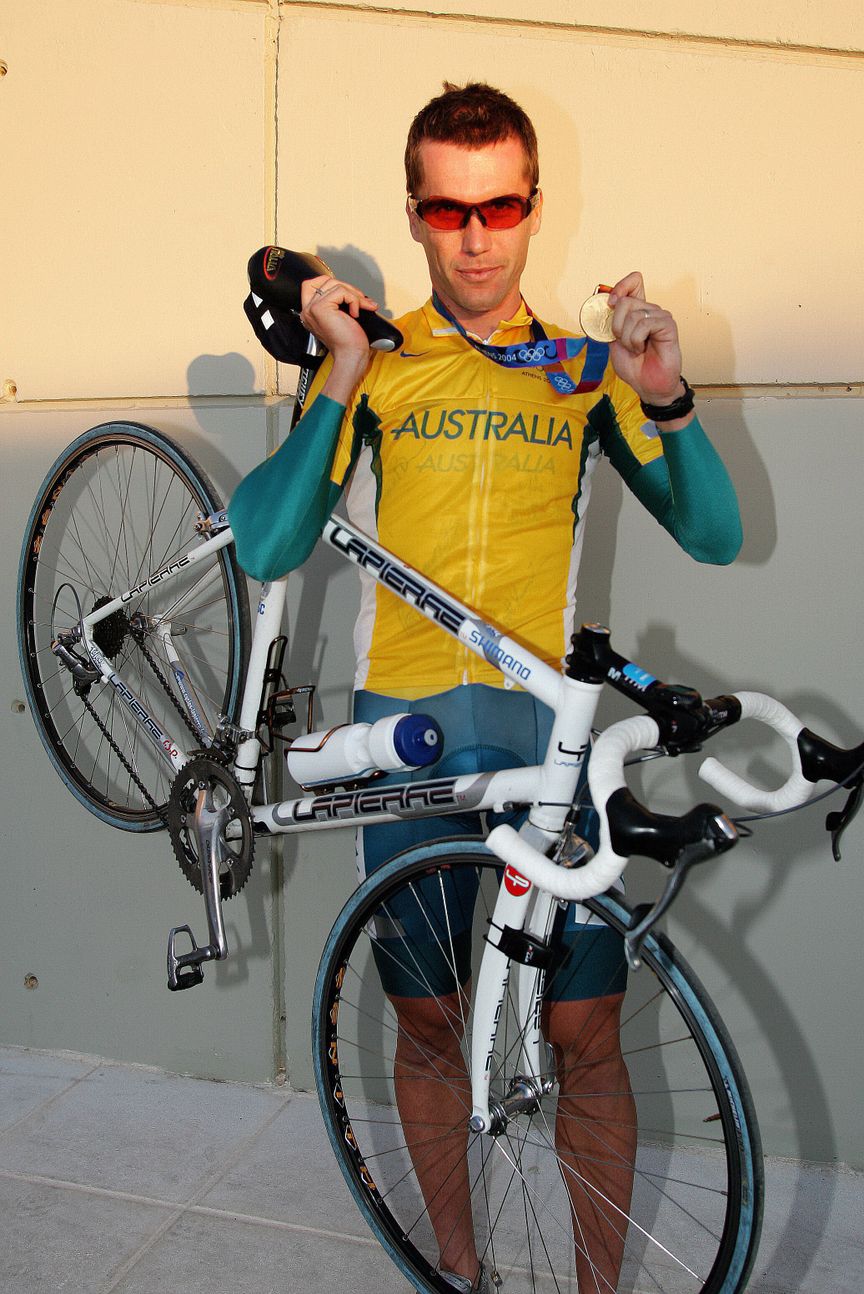 Lapierre also introduced its all-new lightweight carbon technology, LP 0.9C. With this breakthrough development, a road frame was introduced that weighed only 900 grams.

As if to reinforce the technological advancements of the company, the results of Lapierre’s athletes continued to be impressive in all disciplines. The Française des Jeux was the only team to win all four jerseys in 2003’s Tour de France, and they finished in green thanks to an aggressive sprint by Baden Cooke in the final stage.

Although the cycling world often seems to be dominated by men, Lapierre supported a female triathlon team for many years. The performances of Audrey Cleau were exceptional in 2003, which included a second place finish at the long distance World Championships and a victory at the famous Nice Triathlon. As for Sabrina Enaux who became the French XC Marathon champion.

Pink Jersey and The First Range of Textile - 2004

The collection of jerseys was completed during the 2004 Giro d’Italia, when Bradley McGee took the pink jersey after an impressive prologue. Lapierre’s top cross country athlete, Jean-Christophe Péraud was ranked 4th overall in the 2004 World Cup after the seventh race in Livigno, Italy. His consistent performances earned him a spot on the French Olympic team, and he finished a respectable 11th place at the 2004 Olympic Games in Athens.

This same year, in partnership with the outdoor textile and equipment manufacturer Lafuma, Lapierre sold « Lapierre by Lafuma », its first range of technical textiles and luggage for bike riding.

The introduction of the 2005 collection included several innovations, including the new X-Control Evo2 with the improved FPS2 rear suspension system.

Lapierre also chose to concentrate on its export activities in 2005 with distribution in the United States, Canada, Spain, and Germany. At the same time, Lapierre became the main partner of the Roc d’Azur, the largest international MTB event in the world with 16,000 participants.

Francis Mourey won the Cyclocross French Championships on his Lapierre bike, the beginning of a long series of victories. 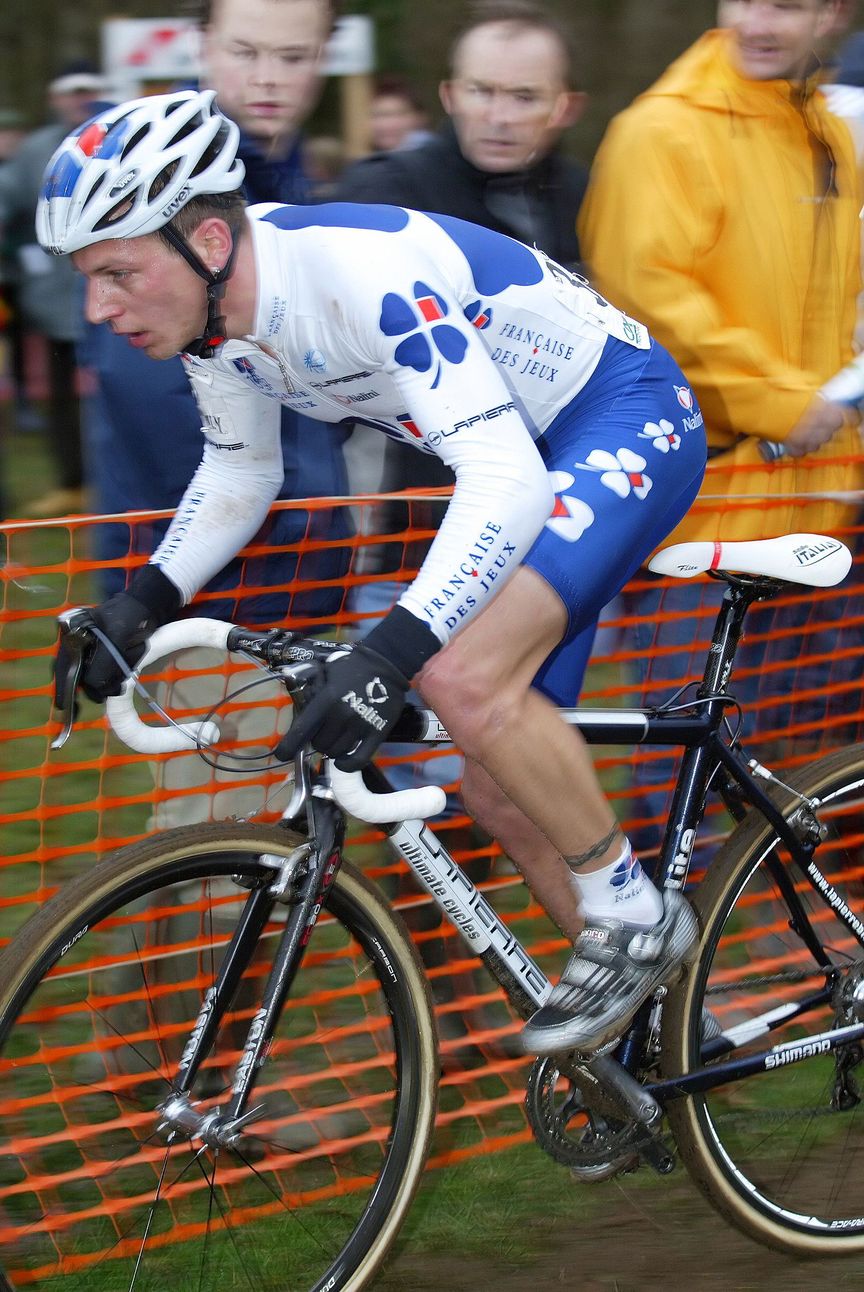 In 2006, Lapierre celebrated its 60th birthday and launched on this occasion a folding mountain bike called Passport.

The new “à la carte” program, Web Series, allowed riders to choose the components of their road bike with the help of an on-line configurator. With assembly in France, riders in Europe could receive their personalized bikes 2 weeks after placing their order with their authorized Lapierre dealer. 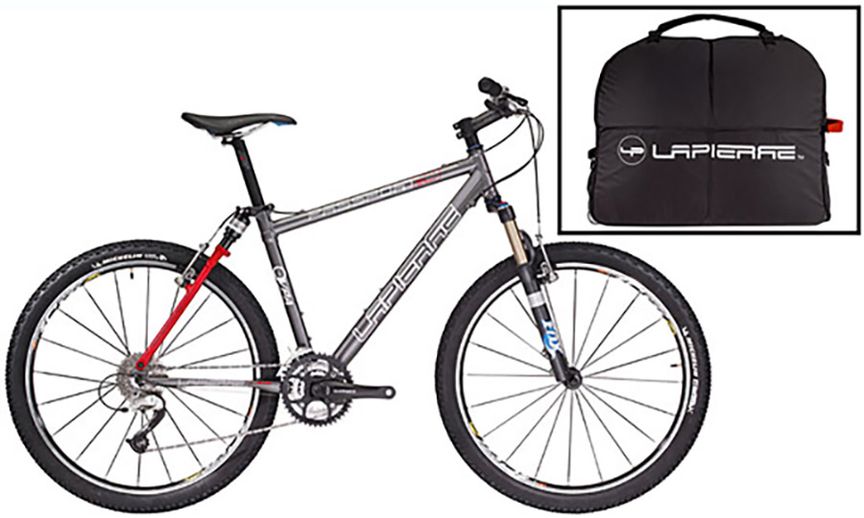 Lapierre introduced their latest advancement in rear suspension in 2007, the OST suspension platform, especially tailored to long-travel bikes. Three mountain bikes use this technology, the Zesty, Spicy and Froggy. The goal of OST was to create the ultimate all-mountain bike with the perfect lightweight blend of versatility, performance, and optimized geometries, for the best possible performance.

Lapierre pushed even further its export activities. Its products were now distributed in most European countries as well as in North America and Asia. Lapierre had become an international brand.

The Lapierre teams remained at the heart of the brand strategy. Nicolas Vouilloz, the winner of the French national rally championships, added some more victories in enduro and downhill races to his list of achievements.

Cédric Ravanel, a cross country rider, proved he was one the best international riders by finishing in the top 3 during a World Cup race and finishing 6th overall.

After 2 years of Research and Development, Lapierre has rethought its road range and launched its brand new X-Lite II carbon monocoque frame, the epitome of lightness and technology.

A new department was created at Lapierre, in order to meet the surge in city bikes needs. This was a 2 stage process :

The Lapierre powered by Saab-Salomon team was officially introduced on the international DH and European “enduro” circuit.

Lapierre, who produced a mere 6,000 bikes per year 50 years ago, now produces more than 90,000 bikes a year at their three French production sites. Dijon, the city where it all started, still remains the heart of technological development.

The Scot Danny Hart, who had joined the Team Lapierre Saab Salomon in 2008 next to David Vasquez and Greg Doucende, won the DH Junior World Cup, the Bronze Medal during the DH World Championships and finished 2nd at the English DH championship.

In 2010, Alexis Vuillermoz of Team Lapierre International became the U23 XC french champion.

In Dalby Forest, Lapierre became the first brand to win a World Cup on a 29er bike thanks to Pauline Ferrand-Prevot on the Lapierre ProRace 29. She went on to win four rounds of the World Cup in a row.

That same year, Nicolas Vouilloz , the 10-times downhill world champion, joined the Lapierre R&D department. He worked with the engineers and product managers in the development of new Lapierre models, while still taking part in some Enduro competitions.

On the road side, the brand celebrated 10 years of partnership with the FDJ.fr professional team.

September 2011: Kick-off of the Rugby World Cup at the legendary Eden Park Stadium! To celebrate this sporting event, Lapierre partnered with one of the most iconic rugby brands, Eden Park. They created two limited edition urban bikes reflecting the spirit of the bowtie brand : the " Blue Bicycle " and the " Pink Bicycle".

After 5 years of development, the first electronically driven rear shock was produced by Lapierre’s R&D department in conjunction with RockShox. e:i Shock is a suspension system driven by accelerometers and captors that record shocks from the ground and pedaling cadence and use this information to determine which setting the shock should be in. The setting is then adjusted in record time.

2013 : Lapierre launch their Overvolt concept with two electric mountain bikes. The Overvolt range will continue to develop over the following years, opening up mountain biking to more people.

2014 : Once again a busy year for Lapierre’s Teams. Several weeks after its first usage by Team FDJ.fr the Aircode took Thibaut Pinot to third place and best young rider on the Tour de France. The team took numerous victories throughout the season: Arthur Vichot won the final stage of Paris-Nice; Arnaud Démare & Nacer Bouhanni took the two top places in the French Championships; at the Giro, Nacer Bouhanni took 3 stage victories and the red jersey for best sprinter. He also took 2 stage victories at the Vuelta. 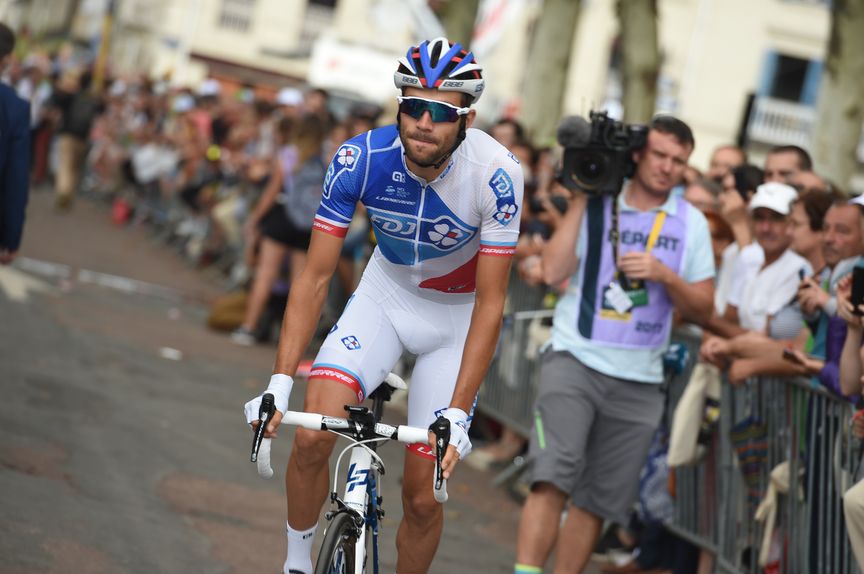 The Launch of The Overvolt Brigade - 2015

Lapierre’s professional riders were also on top of their game. The FDJ cycling team finished the season with 15 victories, most notably Thibaut Pinot winning the stage at l’Alpe d’Huez during the Tour de France. He also finished the season in 10th place in the overall UCI World Tour classification.

The Enduro team were also busy: Nicolas Vouilloz finished 5th in the overall EWS classification and Adrien Dailly, in his first season with Lapierre, won the U21s.

As well as the numerous developments for e-bikes, other notable innovations were launched in 2015, such as TDT (Trap Door Technology) on the new Xelius SL. Lapierre concentrated their efforts on client satisfaction and product quality, most notably obtaining the certification ISO 9001 :2008 for the Dijon site where all the top end bikes are assembled. 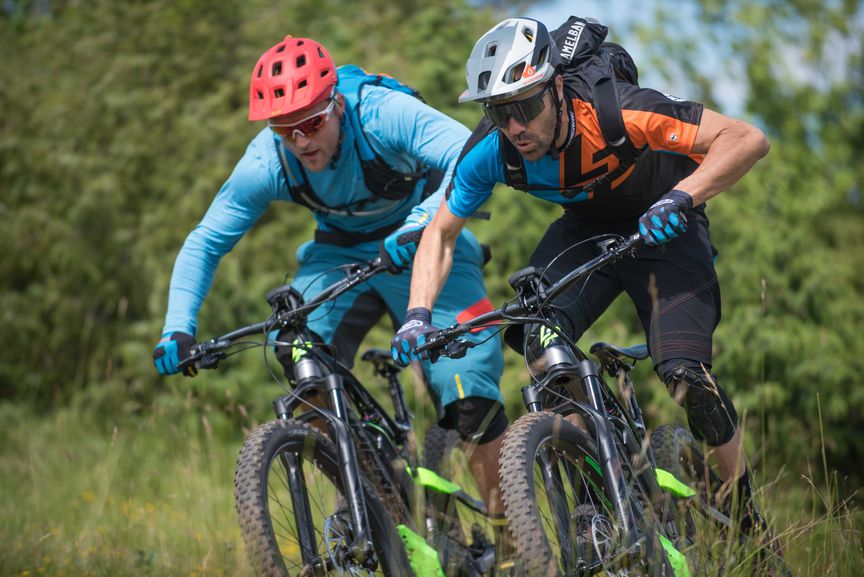 After almost 70 years in the bike business, we are constantly moving forward, innovating, and developing our products to offer you a better ride. At Lapierre, numerous new projects are already underway to keep our place as a leader. We haven’t finished surprising you!